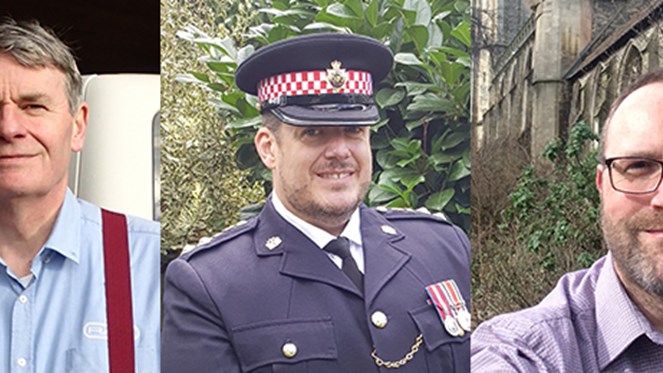 IOSH congratulates members who were included in the New Year Honours List.

Simon French CMIOSH was awarded an OBE, while Jeremy Wall GradIOSH and Affiliate member Alex Page were both awarded British Empire Medals (BEM) in the honours.

Simon is Chief Inspector of Rail Accidents at the Rail Accident Investigation Branch. A member of IOSH for more than 20 years, his OBE was awarded for services to railway safety.

He said: “I feel very proud and honoured to have been awarded an OBE in Her Majesty’s New Year Honours list. I fully appreciate that I could never have achieved this without the support of an amazing team. Over the last 17 years at the Rail Accident Investigation Branch, I have always been able to rely on people who care about the job, who work hard and have the courage to confront the most difficult of situations and issues. Most of all, I have benefited from working in an environment of effective team working, mutual respect and a genuine concern for one another’s well-being. It is for these reasons I consider that my award is shared by everybody at RAIB.”

Jeremy, who is Duty Operations Manager Engineering for London Underground, was awarded the BEM for services to transport and public safety.

He said: “I was hugely proud and absolutely delighted to receive this recognition, which was submitted and supported by my colleagues in policing and transport. That individuals were willing to make the effort to do so is very humbling. It was especially pleasing for the safety aspect to be mentioned in the citation, highlighting the importance of the role that safety practitioners play.”

Alex is Head of Safety and Risk at English Heritage and receives his BEM for services to heritage safety during the Covid-19 pandemic.

He said: “It was a big surprise and a nice end to the year to hear that I’d been nominated for the BEM for services to heritage safety during the pandemic. It’s a huge honour that I accept on behalf of my team and many other people in English Heritage. I’ve been so impressed with my colleagues who have worked tirelessly over the last two years to reduce the risk posed by the virus, while carrying on with essential project and conservation work and maintaining an excellent visitor experience. It’s been a tough couple of years for visitor and tourism-based businesses but the level of information and best practice sharing within the visitor attraction and heritage sectors has been second to none and I’m really proud to work in such a creative, vibrant, hard-working and pragmatic industry.”

Louise Hosking, President of IOSH, said: “On behalf of IOSH, I would like to congratulate our members who have been included in the New Year Honours.

“These awards recognise the importance of good occupational safety and health. Each of the recipients have played a key role in developing crucial ways of protecting working people and the awards are richly deserved.”