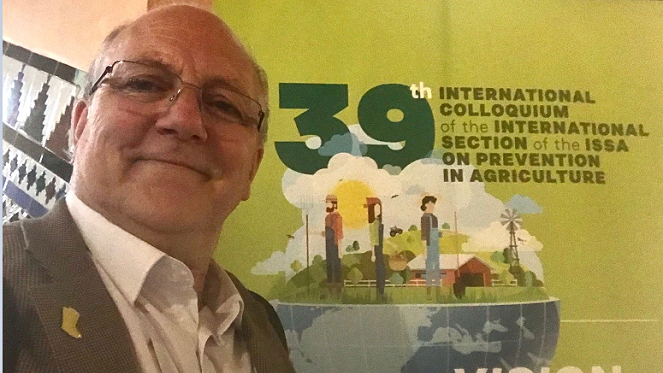 Last week IOSH shared its work on helping to prevent injury, illness and deaths in the agricultural sector during a conference in Córdoba, Spain (15-17 May) organised by the International Social Security Association (ISSA).

Alan Plom, Chair of IOSH’s Rural Industries Group, delivered a session during the conference outlining some of the initiatives IOSH is involved in, both in the UK and internationally, and how they can contribute to the ISSA’s World Prevention Strategy in Agriculture, Vision Zero - a campaign which IOSH has worked with ISSA to develop.

Vision Zero was launched by ISSA at the World Congress on Safety and Health at Work in Singapore in September 2017. The campaign strives towards a world of work without accidents and illness, based around ‘Seven Golden Rules’ to improve safety, health and well-being.  Guidance to help apply these in agriculture was launched at the event. Over 500 organisations across the world have joined as partners, including businesses, universities, ministries, social security agencies and professional bodies.

As in other countries, agriculture continues to have the highest incidence of fatalities in the UK and England’s Farm Safety Partnership (FSP England) has set a target to reduce fatalities on farms by at least 50% by the summer of 2023.

The Partnership in England is supported by nearly 40 organisations and companies. Individual ‘partners’ have their own initiatives, networks and spheres of influence, but work together with the other national Farm Safety Partnerships and Regulators in Wales, Scotland, Northern Ireland and the Republic of Ireland to maximise the impact of guidance and publicity – for example, during the annual Farm Safety Week, and after incidents or prosecutions.

IOSH is an active supporter of all the national partnerships and regulators, for example having a representative on the Board of FSP England and chairing its Working Group and being actively involved in HSE’s Agricultural Industry Advisory Committee.

IOSH has also convened workshops on behalf of FSP England, on machinery safety, handling cattle, and transport and deliveries, to help identify priorities, raise awareness and influence the industry by sharing good practice and guidance.

At a recent workshop convened by IOSH Rural Industries Group on behalf of the Farm Safety Partnership on 1 May delegates shared and discussed the latest research to help us all improve our communications and influence farmers and farm workers more effectively.

This event focused on HSE’s ‘Insight’ research which enables farmers to be ‘segmented’ into four groups and targeted based on their response to different messages and methods of communication. Research and initiatives by universities and other partners, including the ‘Yellow Wellies’ campaign which is aimed at young people will also help us to be more effective in influencing this hard to reach group.

“Our recent IOSH event was very timely as I was able to share these new ideas and approaches being advocated in the UK and Ireland with over 100 like-minded colleagues representing many other countries at the ISSA Colloquium in Córdoba.

“There are so many different initiatives going on around the World, and delegates were interested to hear about our own international activities and how [the IOSH Strategy] Work 2022 and our six priority topics for collaboration support the ISSA’s themes.

“We face the same difficulties in terms of changing the culture to improve safety in agriculture globally, and Cordoba was a useful opportunity to make many new friends who share the same vision - Vision Zero!”