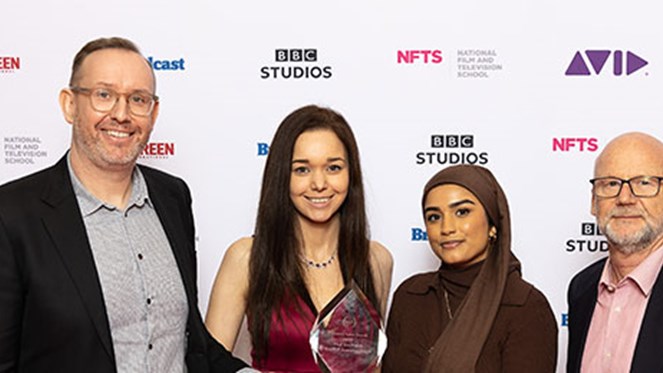 A UK film school that’s produced 13 Oscar winners and whose students have claimed 152 BAFTAs has once again enjoyed support from the Institution of Occupational Safety and Health (IOSH) for its annual Graduation Showcase, which is also backed by BBC Studios.

Two of the films, Thrifted and Casuals, were selected by an IOSH judging panel to share the £1,000 prize for this year’s Health and Safety Management in Film Production award, both competing in the awards’ TV Entertainment category.

It was a tough call for the three judges from the IOSH Thames Valley Branch, who spent two half days deliberating on who should win from eight nominated teams of students producing films across the Fiction, TV Entertainment, Science and Natural History, and Documentary genres for their final-year Master’s degree.

This was a poignant awards ceremony for one member of the IOSH panel, recently retired health and safety consultant and IOSH member Chris Stops. Chris, from Bourne End, has been involved in judging the NFTS health and safety award every year for the last 15 years, but this was his final year.

“We judged these winning two films to have most effectively identified and managed health and safety, because of the way in which they outlined the major health and safety challenges they faced, without prompting,” said Chris.

“Both showed an ability to use the health and safety constraints they had identified as a springboard to using their additional cinematographic and theatrical knowledge to control or eliminate them and enhance their film’s final appearance,” he added.

“They also explained very eloquently the value of the risk assessment process, which they said, if it is detail-driven and used consultatively and iteratively, can solve on-set problems before they arise.”

Thrifted is a socially aware fashion show where three young stylists are tasked with designing a new outfit for a contestant attending a very special event, using only items purchased from second-hand clothing shops.

The film’s production manager Andrew Bowers said: “Fashion/dressmaking is a hazardous pastime, much more than you might think, with various sharp objects, heavy machinery, dyes and other substances being used. Add in a film crew, plus commercial spaces open to the general public and the potential for risk is even greater.

“The show’s producer and I took a collaborative approach to carefully research these hazards to minimise risk on our production; the controls put in place were instrumental to the success of the shoot and, ultimately, our finished programme.

“I have no doubt this will prove useful for future productions in my professional career.”

Set in a theatre, Casuals is an absurd sitcom about a 20-something screenwriter working a zero-hours contract in a rundown local theatre. Production manager Aaliyah Yaqub said: “From the first draft of the Casuals script I knew this would be an interesting challenge for health and safety. Casuals wasn’t a straightforward production.

“The initial script had a horse running through the box office, a crowd riot/fight, someone being set on fire and a character being shaken to death,” she explained.

“I really enjoyed the challenge of seeing how we could achieve the essence of the things we wanted in a way that was safe and without having to compromise on the story.

“We adapted to the challenges around health and safety by either altering our techniques or putting in the necessary measures to carry things out safely and I was impressed with the way the crew and heads of departments inputted into this process and adopted safe working practices.”

NFTS health and safety manager Sunny Bains thanked IOSH for its continued support and Chris Stops, in particular, for his long-term commitment to the relationship: “The IOSH health and safety award provides a valuable lesson and insight into how the risk management process needs to be carefully applied throughout this creative landscape.

“We feel very lucky to be able to offer this to our students,” she added.

“The IOSH judges commented on how the winners explained very eloquently the value of the risk assessment process, effectively identifying and managing the safety challenges they faced. The students really saw the benefits of how good safety management can support creativity.”