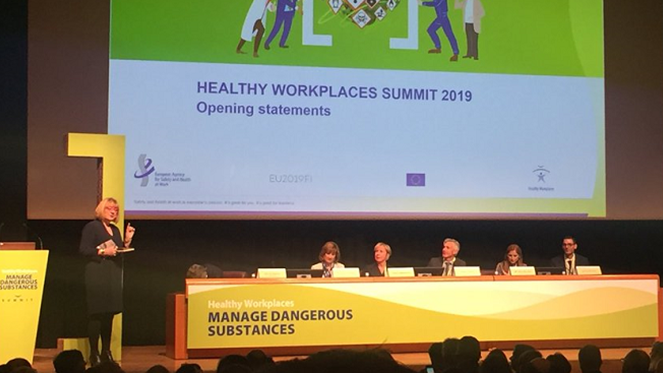 The European Agency for Safety and Health at Work (EU-OSHA) has had an extraordinary level of engagement with its 2018-19 campaign ‘Healthy Workplaces Manage Dangerous Substances’, which IOSH is supporting.

The campaign has been running for two years to help raise awareness of dangerous substances in the workplace and promote ways to manage them.

Christa Sedlatschek, EU-OSHA’s Executive Director, said: “There has been an unprecedented level of engagement with the 2018-2019 campaign. More than 350 activities have been organised by EU-OSHA’s focal points in over 30 countries involving over 17,000 participants.

“Our campaign has reached a wider audience than ever before thanks to the active and engaged involvement of our main campaign stakeholders and our national focal points organising campaign activities.

“Despite the quite specific nature of the topic ‘dangerous substances’, we were also able to attract a very high number of official campaign partners from a variety of sectors across Europe and include companies and associations in both the public and private sectors. Their input is essential to make sure that the message reaches all kinds of workplaces throughout the EU.

“This campaign also stands out for me because of the close involvement of our sister agencies, including the European Chemicals Agency and the European Environment Agency.

“The Healthy Workplaces Summit marks the end of this successful campaign, which will be carried further by providing practical tools and guidance to our audiences and by our ongoing involvement in the Roadmap on Carcinogens action plan.”

During the campaign, EU-OSHA developed a range of campaign materials, including a database of practical tools and guidance, and a broad variety of approaches to managing dangerous substance effectively.

Its interactive e-tool — specifically created for micro and small enterprises — helps businesses to do risk assessments on their use of dangerous substances and provides them with tailored advice on good practice and how to apply effective measures in the workplace.

The e-tool has had 26,000 visits since it was launched in May 2018. The tool is translated and tailored for Iceland, Norway and Portugal. Country versions for Estonia, Austria, Romania, Slovenia will follow shortly.

The EU-OSHA campaign is closely aligned with IOSH’s No Time to Lose (NTTL) campaign which aims to raise awareness of occupational cancer globally and help businesses take action by providing free practical resources.

As an official campaign and media partner, IOSH has collaborated with EU-OSHA on a range of initiatives to promote the campaign, from sharing resources at events and online to participating in workshops.

Christa recognised the benefits of partnering with IOSH on this campaign and said:

“With IOSH as official campaign and media partner we are able to speak with the same voice and to get our messages into workplaces, not only in the UK but also globally.

“IOSH has been distributing our campaign materials, good practice case studies and resources across their network of 42 IOSH branches and 18 industry sector groups of members in the EU Member States, but also reaching the wider OSH community in Asia Pacific, the Middle East and the Caribbean. We are very grateful for this support.”

“We are proud to support EU-OSHA’s campaign to improve the management of dangerous substances. We aligned aspects of our No Time to Lose campaign activity with that of EU-OSHA, to help raise awareness, share good practice and improve standards of management.

“Over the last two years, our NTTL ambassadors have presented slides on the EU-OSHA campaign at more than 40 events organised by IOSH branches and groups, and NTTL supporters. Our campaign webpage and articles have been viewed over 2,000 times, and social media posts have reached an audience of 480,000.

“By working together we have achieved great results to help highlight the importance of managing dangerous substances in the workplace to prevent ill health.”

The Summit concluded with EU-OSHA sharing details of their 2020-22 campaign ‘Healthy Workplaces Lighten the Load’, which aims to raise awareness of work-related musculoskeletal disorders (MSDs), and promote the management and prevention of the issue.

The Agency has been planning and developing this campaign for the last two years and will cover several priority areas including an ergonomic work environment, early intervention of MSDs, staying physically active, and how MSDs can be influenced by psychosocial risks.

“The engagement we have achieved for our dangerous substances campaign will serve as a benchmark for our next campaign.

“The lessons learned throughout the last two years will be taken forward and highly valuable features – such as the practical tools and case studies databases – will feature again, along with the sectoral approach and focus on vulnerable workers.

“The campaign will be launched in October 2020 and this will be our first campaign spanning a three-year cycle.”