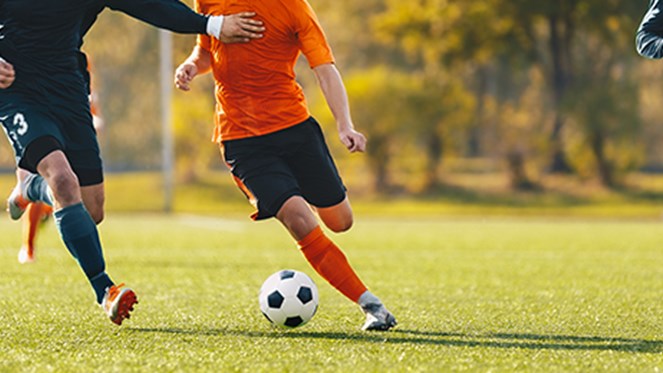 When teenage professional footballer Jake Daniels came out as the UK’s first openly gay player in more than 30 years, he said it made him feel free and confident. IOSH’s Fayola Francis marks this Pride Month by applauding Jake and the boost he’s given the drive for safe, healthy and sustainable workplaces everywhere.

In a watershed moment in British football, Jake Daniels recently came out as gay. With one interview, he became the first openly gay male professional footballer in over 30 years. The 17-year-old spoke frankly about why he came out:

"Since I've come out to my family, my club and my team-mates, that period of overthinking everything - and the stress it created - has gone. It was impacting my mental health. Now I am just confident and happy to be myself finally.

“I have been thinking for a long time about how I want to do it, when I want to do it. I know now is the time. I am ready to be myself, be free and be confident with it all."

It can be hard for heterosexual and cisgender* people to understand why others may feel the need to come out. Jake Daniels sums it up perfectly – being able to be honest and open about your sexual orientation or gender identity is freeing. However, it can also be a risk. According to research by Stonewall, 18% of British LGBTQIA+** staff have been the target of negative comments or conduct from colleagues because they are LGBTQIA+. More than a third have hidden that they are LGBTQIA+ for fear of workplace discrimination. This figure is obviously higher in some areas, as shown by the fact that Jake Daniels is the first professional male footballer to come out in a generation. Change is happening but it needs to be faster and more widespread, so we don’t have to wait another three decades for a professional male footballer to feel safe to come out.

As our Catch the Wave initiative shows, social sustainability – a model that puts people first – is vital for organisational resilience. Organisations cannot be sustainable without protecting the safety, health and wellbeing of their people. A modern definition of safety, health and wellbeing must include psychological safety, or the ability to speak up without fear of being humiliated or penalised. Psychologically safe individuals are less likely to struggle with stress and more likely to experience high levels of job satisfaction. In turn, this leads to more successful workplaces. Organisations with high work psychological safety have seen lower staff turnover, as well as significant increases in employee engagement, collaboration, skills preparedness, and productivity. In his coming out interview, Jake Daniels said that he scored four goals in the first match he played after coming out. That’s psychological safety in action – someone flourishing in their role once they were able to be true to themselves.

A psychologically safe workplace is built on a culture of respect, dignity and inclusion. That means organisations and leaders holding themselves to account, listening to their people and making meaningful change, even when it is challenging. At IOSH, we believe that equality, diversity and inclusion (EDI) are integral to our vision of a safe and healthier world of work. We want to develop and implement practices that challenge stereotypes, break down barriers and allow everyone connected to IOSH to thrive.

Words without action are not enough, so we have committed to achieving a proactive maturity level in the Global Diversity, Equity, and Inclusion Benchmarks (GDEIB) by the end of 2023. Created by a panel of experts, the GDEIB helps organisations to assess their current context, determine strategy and measure progress in managing diversity and fostering inclusion. Our first step has been to thoroughly understand the lived experiences of our employees by running focus groups, surveys and workshops, and developing a culture where everyone can speak up and be listened to. Building on our staff input and the GDEIB, we will create an inclusive, psychologically safe environment for our employees, volunteers, members and beyond.

Jake Daniels’ coming out has highlighted the importance of every person feeling safe enough to be their whole true selves. Psychological safety, particularly for marginalised, underrepresented or historically excluded groups, sits at the heart of safe, healthy and sustainable workplaces.

**   The letters in LGBTQIA+ stand for lesbian, gay, bisexual, trans, queer (or sometimes questioning), intersex and asexual/aromantic. The plus is to show that this list isn’t exhaustive, that there’s an infinite number of sexual orientations and gender identities