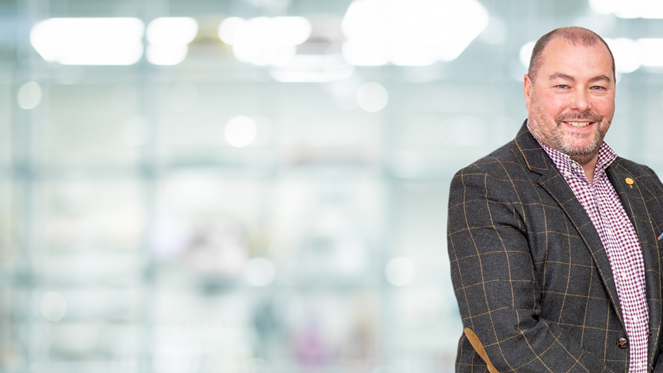 The new President of the Institution of Occupational Safety and Health (IOSH) has called on its members across the globe to step up to the fact occupational safety and health (OSH) is now recognized as the fifth pillar of universal human rights.

Speaking on being confirmed as the 56th IOSH President in its 77-year history, Lawrence Webb cited the International Labour Organization (ILO) adoption, last June, of a safe and healthy work environment as a fundamental principle and right as an inspiration to OSH professionals to do “remarkable things” for a safer, healthier global workplace.

“This move from the ILO meant the world, never mind the world of health and safety, will never be the same again and I urge all those responsible for OSH to be inspired by this,” said Lawrence.

Putting the emphasis firmly on prevention, the new President urged IOSH’s 49,000 members from more than 130 countries to be courageous: “Let’s grasp the nettle and commit ourselves to denying potential hazards any chance to fester in workplace by removing them at source – we can do this by forging a clear, ambitious mindset, one that thinks not in terms of the management of risk but its eradication.

“But, yes, we’ll have to be bold to do this; we’ll need to challenge and influence those at the highest levels of business and employment, those making the big decisions with the greatest impact on workers’ safety and health,” he added.

Lawrence, also Group SHE Strategy Director at Costain, believes this emboldened approach will be further fueled and sustained by the next generation of OSH professional, “fresh new talent with not only the ambition and dynamism to force health, safety and wellbeing into the world’s boardrooms, but also bring it further forward in our global public consciousness.

“We have to convince career starters to see OSH as their first profession; and we have to boost IOSH stakeholder relationships and support our membership, creating clear pathways for progression through our membership structure.”

The new President also stressed the need to help new OSH professionals prove themselves and their capabilities in the workplace, further building the respect and reputation OSH will need for it to be most effective. Vowing continued IOSH investment in its dynamic Future Leaders community, he highlighted support for members’ development through the newly launched ‘Opportunity starts here’ programme, as well as IOSH further growing its presence in schools, colleges and universities.

Lawrence also committed IOSH to “continuing to tender the neurodiversity of all people”, something he sees as being key to both the profession and IOSH reaching their full potential by following IOSH’s own Catch the Wave fundamentals of social sustainability.

“The Covid-19 pandemic has seen the stock of the OSH profession rise to new heights, with an enhanced awareness of the value we bring to business and society,” he added.

“Let’s use and build on this hard-won credibility to support and influence all those who can help create a safer, healthier world of work.”