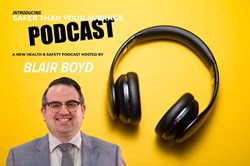 The West of Scotland’s newest initiative “Safer Than Your Average” podcast began in June 2020 and is hosted and produced by committee member Blair Boyd. It is a weekly-released podcast which invites mainly health and safety influencers and thought leaders from Scotland and around the world to share their career journeys through engaging dialogue and anecdotal stories. 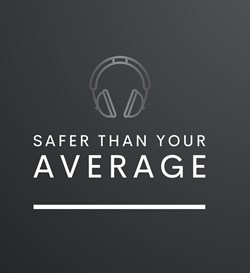 Episode 02 - Interview with Dylan Skelhorn Safety Motivational Speaker Safety Up, discussing his life changing injury from falling from height and how it changed the course of his career.

Episode 03 - Interview with Eddie Woods Joint Owner of Karrdale, discussing his life Inspiring Safe Communities® to help his clients come to new ways of thinking when it comes to engaging with their people.

Episode 04 - Interview with Bill Cassells LEV Expert and owner of OxyL8, discussing his life, career and all things LEV as well as some of the phenomenal inventions he has been working on.

Episode 5 - Charting the career journey of Jimmy Quinn IOSH President Elect discussing his time spent in the British Army, work in the Middle East and what to expect from his Presidency.

Special Edition Episode- Piper Alpha- Joe Meanen- One of the 61 Survivors of Piper Alpha, Joe shares his experience of the explosion on Piper Alpha, an oil platform located approximately 120 miles (190 km) from the coast of Aberdeen, Scotland on the 6th of July 1988 and his life after the event. The disaster claimed the lives of 165 rig workers and 2 crewmen of a fast rescue craft assisting in the search and rescue operation. If you can, please contribute to https://poundforpiper.com that helps to pay for the upkeep of the memorial in Hazlehead Park Aberdeen. Dedicated to the memory of the 167 and to the 61 survivors whose lives have changed insurmountably after the disaster.

Episode 6- focuses on Dr Karen McDonnell Occupational Health and Safety Policy Adviser for the Royal Society for the Prevention of Accidents (RoSPA) and Head of RoSPA Scotland. Karen is also a former IOSH President and serving member of the IOSH Council

Episode 7- Fraser Allan discusses his career progression from Apprentice Cabinet Maker to Managing Director of CBES (a large construction company based in Scotland), with a large portion of his career spent in Occupational Health and Safety Risk Management.

Episode 8- In this week's interview John Green Vice President Global HSE for SNC Lavalin takes us through his incredible career journey, from his early career in Scotland, through some pioneering work in the Middle East that helped to form Middle Eastern Health and Safety legislation, working for Laing O'Rourke in both Europe and Australia and his most recent role with SNC Lavalin. John was credited with bringing Safety Differently to Europe after an invite from an old colleague (Sidney Dekker) to a meeting that formed a movement that became a global shift in occupational safety and health management.

Episode 10- Jessy Gomes is a French National with Cape Verde Island origin is a Master degree holder in Health, Safety and Quality Management from France; a Researcher; Chartered Health and Safety Practitioners (CMIOSH) Member; Certified Member of the Association for Project Safety (CmAPS); and an Entrepreneur and Equality Advocate within the Workplace. Jessy with more than 15 years of experience within QHSE has built her Safety Management Career at three (3) blue-chip companies in London; before embarking on a PhD at University College London’s Bartlett School. She was recognised as one of the "Most Outstanding Representative" of the "Rising Generation in Health and Safety" by the International Institute of Risk and Safety Management (IIRSM) - The Health and Safety at work Magazine in 2019. She is an IOSH Council Member and currently Health and Wellbeing Lead for the IOSH London Metropolitan Branch. Thank you as always to our friends Inside Out Group for all the editing support.

Episode 11- Roger Willie is one of the foremost experts in Asbestos in both the UK and Internationally. An IOSH West of Scotland Alumni and eminent professional. Rogers work has saved many lives over his career and he was instrumental in both an academical and practical setting at developing some of the asbestos removal and remediation strategies used today.

Episode 12- Laura Aucott discusses all things Health and Safety Recruitment, a seasoned recruiter, Laura provides advice on starting out in safety as a career path, moving in to a management role and much more.

Episode 13- We talk to Dr David Gold, CFIOSH about his incredible career journey being a fire fighter in the US and moving to Switzerland to work for the ILO with a brief stopover teaching the Sea Gypsies in Thailand about carbon monoxide.David is a Vice President of IOSH and a really great guy!

Episode 14- Jane Gurney talks to us about the death of her son Harry and how she developed Till's Trailers to try to prevent another family going through the pain that she has.

Special Edition Episode, Safer Than Your Average brings the story of Kayla Bergeron Director of Public Affairs during the 9/11 terrorist attack on the World Trade Centre in 2001. Kayla shares the story of her escape from the Twin Towers and the immediate aftermath of the events of the day that would change the world. Kayla also describes her life after 9/11, her struggle with PTSD and being arrested for drunk driving and her recovery, thanks to a court accountability programme. Kayla tells us all about her amazing work to help others through The Connection Forsyth. It was a career highlight to spend time talking with Kayla and I feel privileged to have heard her story. This Podcast is dedicated to the memory of all the souls who perished on September 11th 2001 and the survivors, many who are still suffering both mentally and physically from their experiences of the day. 9/11 Never Forget.

Episode 15- Matt Jackson talks us through being Head of HSEQ for WSP in the Middle East after a successful career in the British Army.

Episode 16- Rick Bate discusses his early career in the Ambulance Service, how he overcame PTSD and how he is now Head of Safety at FIA Formula E. Rick takes us on a journey of his time spent working in safety in the events industry and a stint as the Health and Safety Manager with Top Gear as well as being Jeremy Clarkson's stunt double :-) A fascinating career journey and some really great experiences and wisdom shared. One not to be missed!

Episode 17- Engineer, Safety Geek, Leader, Manager, Consultant - elements of all these have helped Colin Russell to help others and help make the skies safer, from almost 20 years in the Fleet Air Arm, to over 5 years as an Aviation Safety Consultant with Baines Simmons, and more recently as the Safety Director of the Thomas Cook Group and now Flybe (all be it in Administration), Colin sees his role as supporting and enabling others to make every day in aviation a little safer and more resilient than the day before. Colin is really keen about talking safety in normal ways, and often refers to ‘pub language’ so be warned if you don't like the fruity vocabulary of a sailor!

Episode 18- Having grown up around the construction industry Duncan Aspin was bitten by the builders bug early in life. Duncan worked with his father as a child and naturally progressed into a full time career initially managing construction projects. Over time his passion for safety was sparked and he moved in to a safety focused role. Duncans experiences of influencing human performance are truly incredible, he has developed the well respected Safety Ripple Effect for Volker Stevin which is renowned in industry. This will be a great Podcast for anyone looking to move into a role involving strategical planning and development of theories into practice. Duncan provides some excellent insights and advice.

Episode 19- On this weeks episode Billy Hare talks to us about his academical research in Construction Health and Safety. We explore some of the amazing work and results Billy and his team have produced at Glasgow Caledonian University. This will be a great one to watch if you are interested in a career in safety or if you are bit further on with your career and you would like to collaborate with Billy to produce some research.