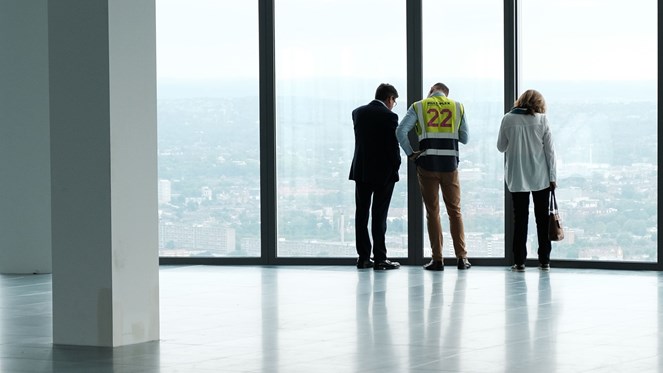 Construction workers who helped to build one of London’s tallest and newest skyscrapers were provided with many facilities where they could spend break times.

But as well as being able to get food and drink or perhaps use the games room or gym equipment provided, they were also able to get a haircut!

Driven by a desire to ensure workers’ health, safety and wellbeing was looked after while 22 Bishopsgate was constructed, principal contractors Multiplex introduced an on-site barbershop.

Martin Wilshire, Health and Safety Director, recalls: “There was some initial scepticism about opening it, but it went down really well. It meant people working on the site could get their haircut in the week, meaning they could spend more time doing the things they wanted to in their free time’.

“At the same time, people would speak to the barber about problems they may be experiencing, including mental health issues, so they were able to be open about their concerns.”

The gesture of the on-site barber idea proved successful and was latterly adopted by one of its sister companies in the USA after a visit to the project. “It was a gesture by the project team that they wanted people to enjoy their time on the project,” says Martin. “It’s an example of how we want to change project facilities that create value by people feeling good at work.”

Providing this facility is just a small part of something far bigger at Multiplex. The firm is fully focused on ensuring it looks after its people, both direct employees and those working in its supply chain. Senior managers recognise the value its people bring and that by treating them well they will respond productively.

IOSH’s Catch the Wave campaign, says Martin, is fully aligned with what they do. “I was hugely encouraged to hear about the campaign, as it really resonates with our business and what we are about.”

A journey to social sustainability Multiplex operates in a number of countries around the world. Having been established in Australia in the early 1960s and become prominent in Australia’s major cities, it has grown and now also focuses its efforts in the UK, Canada and Middle East.

Martin reports that when he joined the firm in the UK in late 2015, they had a “traditional outlook” when it came to health, safety and sustainability, with the latter very much recognised as being about the environment.

That is something they wanted to set about changing and they brought in expertise from the Middle East side of the business as they had 4,000 people based in labour camps and had been tasked with making sure ethical labour practices were being followed and workers looked after.

They immediately set about evolving the strategy, signing up to the Gangmaster and Labour Abuse Authority Construction Protocol, which aims to stamp out modern slavery, and installing an ethical labour management system.

They collaborated with other firms in the industry and brought in a number of measures to address the risk of modern slavery in supply chains, including working with the occupational safety and health team to ensure they could spot the signs.

Martin said: “In 2018, we collaborated with the Building Responsibly group to co-draft the Building Responsibility Principles for worker rights and welfare based on our operations and systems that evolved in the Middle East. This was adopted by six construction companies and 20 oil and gas companies. Having bolstered our approach in the UK, we did find a number of instances of people being at risk and not being ethically treated”.

“We wanted to link in with the supply chain and undertake an audit process to understand people’s journey from recruitment to employment. By 2019, we were interviewing the workforce and asking them about their journeys.

“From here, we established a global business plan to ensure that our recruitment procedures are ethical and free from discrimination.”

As well as the recruitment side, the firm has introduced mechanisms to allow people to report concerns about modern slavery. Part of our online health and safety induction for the construction workforce includes raising awareness of their entitlements and contact numbers to seek advice, giving people the chance to flag if they aren’t being treated well, for example having their passport confiscated.

Training and toolbox talks have also been given to hundreds of workers.

Having spent three years reacting to issues and putting a framework in place, from 2020 Multiplex has focused on its broader ESG strategy, which includes a social equity strategy called ‘Leave No One Behind’.

This is closely aligned to four of the United Nations Sustainable Development Goals and there is a real determination to engage the workforce in how they are protected from injuries, ill health and wellbeing issues. It is hoped that such moves will enhance the image of the construction industry and enable it to attract the next generation.

“If people see their grandad who worked in construction years ago suffering from ill health, this leaves a lasting negative impact,” added Martin. “I have spoken with people who say they don’t want their children working in construction. This really shows we must change how we treat people. In our leadership team, we are driven by making people’s working lives the best they can be.”

It is from this where one of the firm’s most recent initiatives has been born. It’s One Life, One Team drive is based around people having positive experiences with Multiplex, through instilling trust and delivering positive and rewarding experiences through engagement and environment throughout operations.

Focusing on the 22 Bishopsgate project, there was a drive to ensure workers knew their suggestions, feedback and complaints were listened to and taken on board, and acted on appropriately. It was all part of a plan to get them to open up – with regular ‘Time-outs’ being undertaken on site to allow for workers to openly discuss with management how they felt and what could be done better – and laid the foundations to be able to talk about the right behaviours on site.

“We wanted to allow for open conversations to build a relationship of trust and transparency, for people to be able to discuss changing something and, if it was deemed safe to do so, to go ahead and do it,” said Martin. “It’s about collaboration and putting people at the centre of what they are doing.

“We also want people to be aware that if we say we are going to act on something we will, and we will go back and say what we have done.”

Part of this work has also included video analysis of work on site, giving people the chance to provide honest and open feedback.

In addition to worker engagement, it is also important to Multiplex to ensure access is provided to the right facilities on site. It was through this that the idea of having an on-site barber came about. More recently, its Chelsea Barracks project the team set up a wildflower garden area with seating and shelter to allow the workforce to find a place to pause and reflect.

This all links into how the organisation ensures the health and wellbeing of workers is catered for. Leaders are determined that this is a constant consideration rather than something they have a big push on and then move onto another area.

With this in mind, they have visited sites to talk about health and wellbeing with workers and collect data on what is being done well and what isn’t working well.

“The wellbeing piece is embedded into our ESG strategy,” said Martin.

The company’s ESG goals includes a focus on working hours to ensure people don’t compromise their own wellbeing either for the benefit of the firm or to gain extra money.

“We face a challenge in construction,” says Martin. “We still have a typical five-and-a-half or six-day week which impacts the work-life balance. Those in PAYE positions such as construction management are more likely to get the additional time worked back in lieu, but the practice encourages the hourly paid worker to put in excessive hours of highly physical work which is detrimental to their health and wellbeing. The industry needs to work together to change this approach.”

“As the leader of our European operation, I am committed to a safe and engaged workplace whether it be one of our iconic projects, one of our offices or other place of work. Our success is based on our people, and we all perform at our best when we valued and motivated. I am pleased to introduce One life. One team. which encapsulates the essence of how we engage, redefine our behaviours and create a winning environment, to better serve each other and achieve our collective goal to outperform.”

“If you deliver a great working environment to people, they will give back,” said Martin.

Multiplex is passionate about workers seeing themselves as a key part of any project and having pride in what they do. To help with this, they have set up open days for friends and family.

One worker with over 30 years’ experience on construction sites said he had never been on a project run as well as 22 Bishopsgate and said he’d fully support family members joining Multiplex.

And it isn’t just workers who provide positive feedback, with clients also expressing satisfaction both with how sites are run, their interface with workers and the standard of delivery.

“This is because the workers are positive,” said Martin. “When you walk around one of our projects, you sense there is an engaged workforce and a really good atmosphere to work in.”

How Are You? - video