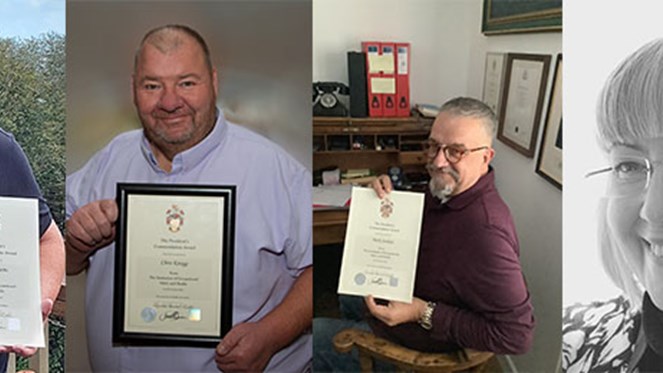 We celebrate the contributions made by four individuals to the occupational safety and health profession. Their selfless work has been marked by Awards given by the IOSH President. One receives the President’s Distinguished Service Award and three receive the President’s Commendation Award – one posthumously.

Tudor Williams has received the President’s Distinguished Service Award for his outstanding contribution to the OSH profession in South Wales. A Chartered member, he has been a member of South Wales Branch for six years.

As Chair, Tudor led the branch to its first award, for working in the South Wales Safety Groups Alliance, bringing together no fewer than five safety organisations in the region.

Tudor worked tirelessly for the branch. He fought for better succession planning and in May stepped down from the role of Chair to enable others to grow into this and other committee roles.

He has been a huge influence beyond IOSH, working in the community, the Welsh Assembly Government and supporting the younger generation of OSH professionals. He has been involved in mentoring for many years.

To give some idea of the regard in which he is held by his fellow professionals, Tudor’s nominators for the President’s Distinguished Service Award described him as collaborative, innovative, visionary, mentor, influential, leader, approachable, knowledgeable and caring.

Receiving his award, Tudor said: “I am proud and honoured to have received this from our President. Whilst I am very pleased to be recognised for the contribution I have made, I recognise that volunteering also requires willing participants and through my branch and my work I have been fortunate to continually engage with people who themselves want to learn, contribute, participate and develop. Thank you to my branch and to all those inspirational people who continue to work hard to make our workplaces safer.”

Chris Knagg has been a member of the Manchester and North West Districts Branch for about 10 years and helped to establish the East Lancashire District. He is committed to building relationships between the different units making up the branch and made it a point to visit all the districts and sections in the region. Apart from his responsibilities as Chair of the branch, Chris has supported the districts and sections, attending and sometimes chairing their meetings.

During the last 18 months, he has led the branch in embracing virtual provision and enabling cross-branch collaboration. He has set up regular separate Zoom calls in the evenings to ensure the committee has been able to provide CPD support to members, while also creating a place for pastoral care.

He gives his time freely and willingly when it comes to helping others and is always available to advise and support.

Chris said: “Delighted to have received an IOSH President’s Commendation Award for ‘services to health and safety’ from Jimmy Quinn CFIOSH, IOSH President. I was nominated for this by the Manchester and North West Districts Branch committee, led by the Chair Tom Beswick-Brown MSc CMIOSH, and supported by so many others from the Branch and Districts.

“I accept this on the basis that I am surrounded by some great people who have been instrumental in my success and my heartfelt thanks go out to all of you. Thanks for your support, encouragement and faith in me.”

Mark Jenkins receives a President’s Commendation Award for his work with the Offshore Group for six years. He has also been a long-standing member of the IOSH Essex Branch and a member of its mentor team.

Mark has had a significant role in growing and developing the committee. He actively embraced virtual meetings and webinars, collaborating with other IOSH groups and branches. He has welcomed new committee members, ensuring they know where to turn to for support and assistance. His peers think of him as a good and effective communicator who has made it easy for the team to work together. He is generous with his time and always willing to share his in-depth knowledge.

Despite a busy full-time job, Mark has made mentoring a ‘must’. He is passionate about ensuring that the next generation of OSH professionals have the right support and advice and that all mentees have an opportunity to grow professionally.

Carolyn Reid was not an IOSH member, but her work to support IOSH members was recognised at this year’s IOSH West of Scotland Branch Certificate of Merit Awards. Carolyn was thrilled by this. Sadly, Carolyn passed away in July. The IOSH President’s Commendation Posthumous Award recognises her contribution to our profession and marks her place in our shared history.

Carolyn’s volunteering with the IOSH West of Scotland CFIOSH group over the last year helped many people advance their goal of becoming a Chartered Fellow of IOSH.

Carolyn made a significant contribution to the OSH and road safety community in Scotland. She worked in the Occupational Safety and Health Policy and Road Safety teams at the Royal Society for the Prevention of Accidents (RoSPA), where she supported the Partnership on Health and Safety in Scotland, of which IOSH is a member. She coordinated workshops to share best practice in Scotland and more widely in the UK. Her influence extended to Safety Groups UK and RoSPA’s National Occupational Safety and Health Committee.

Carolyn helped organisations understand the importance of managing occupational road risk. She represented the Scottish Occupational Road Safety Alliance at the Cross-Parliamentary Group on Accident Prevention and Safety Awareness, championing the cause of those who drive for work. She encouraged the IOSH network across Scotland to engage in this.

RoSPA has received many messages of sympathy, from IOSH members and other key stakeholders, which really capture the essence of Carolyn’s influence. She will be missed by those who worked with and volunteered alongside her. We know she would have been delighted by this Award.