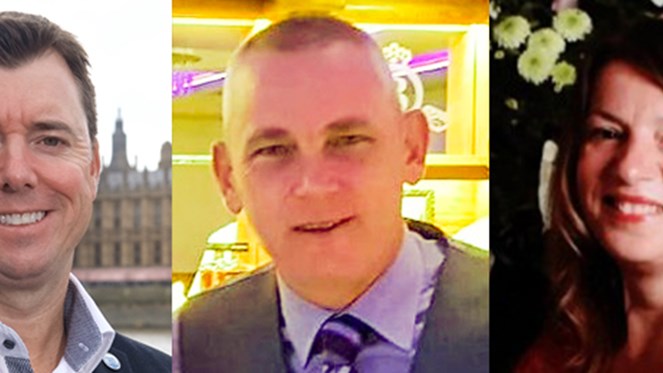 IOSH congratulates three of its members who were included in the New Year Honours List, which recognises the achievements and service of extraordinary people across the United Kingdom.

Karl Simons, Chief Health, Safety and Wellbeing Officer at Thames Water, has been awarded an OBE – becoming an Officer of the Most Excellent Order of the British Empire – for “services to mental health policy”

An Armed Forces Veteran, Karl began his safety and health career in 2003 with Carillion and held several senior posts before moving to Thames Water in 2012.

During his time at Thames Water, Karl has developed an impressive mental health and wellbeing programme and ensured mental health is given the same attention as physical health in that organisation’s supply chain. This has seen work-related illness in the company reduce by 80 per cent.

He has also led on a drive to destigmatize mental health across the utilities industry and has encouraged the Government to legislate on ensuring organisations provide better mental health support and put measures in place to enable intervention.

Karl has played a key role in a number of developments for IOSH. This included participating in a high-level round table and helping shape IOSH’s 2018 guide Mental Health First Aiders: Workplace considerations. He has also supported the development of its competency framework for members.

In an article on Thames Water’s website, Karl said he was “incredibly overwhelmed and emotional” about receiving the news about his OBE and had to call the Cabinet Office several times to check it was real.

Karl was named SHP Magazine’s ‘Most Influential Person in Health and Safety’ in 2019 and in the same year led a session on disruptive thinking at IOSH’s international annual conference.

He was joined on stage in that session by Amanda Owen, who has held her post at Heathrow Airport since January 2019. Her previous appointments include roles at Bupa and RBS.

A Chartered Member of IOSH, her MBE relates in particular to the work she has done during the Covid-19 pandemic. She oversaw the introduction of many measures designed to manage the transmission risk faced by staff and travellers.

These included raft of social distancing measures, changes to staff processes – such as signing in processes, briefings and arrangements for travel and breaks – and the provision of PPE.

She said: “I am honoured and thrilled to receive this award. I’ve worked in aviation for over ten years because there is something very special about it. I’m therefore especially delighted to be recognized for my services to transport.”

The MBE awarded to Paul Miller, also a Chartered Member, is also reflective of his work during the Covid-19 crisis. An article on the Asda website said he “worked tirelessly to ensure the health and safety of colleagues and customers. He assessed more than 40 roles from across our business to create an extensive risk management programme for each as well as carefully reviewing around 50 chemicals, PPE and equipment”. In response, Paul said: “I am absolutely delighted and proud to be recognised in the New Year Honours List. A huge thanks to all the teams who have supported that response and a special mention and thanks to the Asda HSE team for all their efforts. It has been a real privilege to work with so many dedicated people to ensure we keep people safe, in these challenging times.”

Jimmy Quinn, President of IOSH, said: “On behalf of IOSH, I would like to congratulate Karl, Amanda and Paul on their accolades in the New Year Honours List. These awards recognize the importance of good occupational safety and health.”

“Each of them have played a key role in developing crucial ways of protecting working people. Karl has helped to raise awareness of the importance of good mental health, and how to manage associated risks, both within Thames Water but across the wider industry and business landscape.

“Amanda and Paul have played significant roles in managing the risks of Covid-19 transmission within their businesses, both of which have had to continue operating due to the key services they offer.”