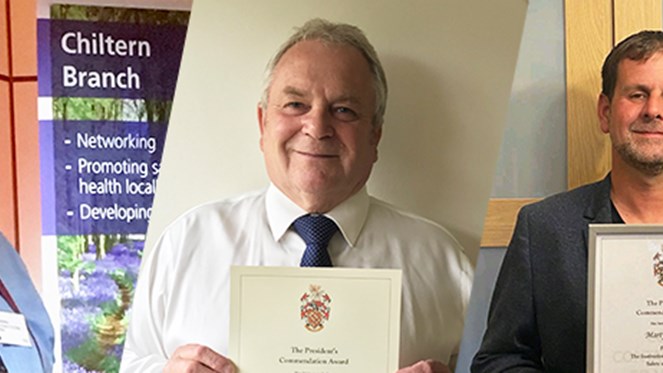 As well as volunteering for IOSH, Chris also volunteered for St John Ambulance, Red Cross and a community swimming club for disabled children.

Sadly, he passed away in May, but the PDSA was presented posthumously on 23 June.

His award nomination referred to him as a “real driver in health and safety”. It also spoke about his knowledge, commitment, and professionalism, and how he went above and beyond pushing obstacles out of the way to protect others from harm. He was described as an inspiring, caring individual who gave as much as he could to help others.

Also presented on 23 June, Martyn received a President’s Commendation Award. A committee member of the Chiltern Branch, a peer review interview panel member and an ambassador of our No Time to Lose campaign.

His nomination form said: “Martyn has gone over and above supporting the professional development of many of our members, of which eight have successfully progressed to Chartered status.” It also described him as “passionate, committed, energetic and proud of all that IOSH stands for.”

Receiving the award, Martyn said: “It’s an absolute honour and privilege to have been nominated. The Commendation award reflects all the time, advice, guidance, and assistance that my fellow associates have given me, of which I am able to share with others. The pandemic has brought us all together and this award signifies that collaboration between us all. Receiving this award has inspired me to keep doing what I am doing and more. Thank you.”

Earlier in the month, on 10 June, Alan also received a President’s Commendation Award. He has been with the East Midlands branch for 14 years. In that time, he has increased the branch’s events from one per month to two with some great speakers and subject topics, supported members through CPD and IPD, co-hosted fellowship sessions, conducted numerous fellowship interviews and peer review interviews, and held several mentoring sessions.

The nomination form stated Alan as “a true credit to the Institution, supportive, dedicated and a true advocate for all that IOSH stands for”.

Alan said: “It was the biggest surprise of my life. As a volunteer for many years, I have loved every minute offering my services and giving back to the world’s leading health and safety organisation. Receiving the President’s Commendation Award is truly an honour and a privilege. A massive thank you to all at IOSH and members that have given me support as a volunteer.”