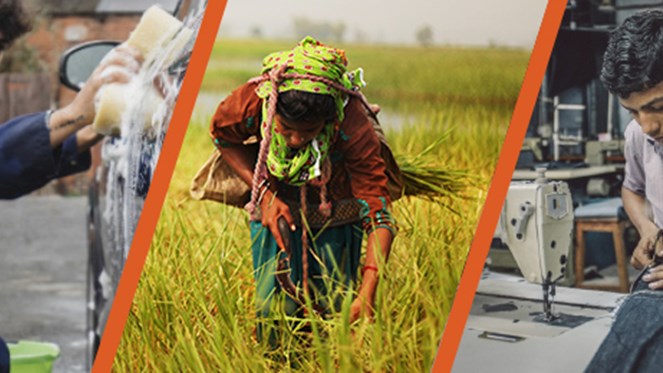 As we look to mark International Workers Day on 1 May, the Institution of Occupational Safety and Health (IOSH) is calling on governments, employers, professionals and the public to think of the distress of those 40+ million current worldwide victims of modern slavery. Better still, we hope they’ll join IOSH in tackling the scourge of modern slavery together and help consign it and human trafficking to history.

And you can support this through our #MayDayCall social media campaign, linked to #InternationalWorkersDay on 1 May, or ‘May Day’ as the date has traditionally been known. We’ve linked this to ‘Mayday’, the classic distress signal used in radio communications by aviators and mariners to flag a life-threatening emergency.

The emergency here – and a threat to more than 40 million lives – is the distress and damage caused by the exploitation and misery of modern slavery. So please follow us, share our posts and use the #MayDayCall hashtag on your social media platforms to raise awareness and show your commitment to tackling this abhorrence.

There are times when a nation feels a collective shame, even though an event may have been beyond people’s consciousness. One such day was 5 February 2004, when 23 Chinese cockle-pickers drowned in Morecambe Bay. They were victims of the bay’s notoriously dangerous quicksand and fast-moving tides… and the cruelty of the gangmasters who forced them to work there unprotected. Those tragic workers must have felt terrified, a long way from home.

Then we all learned too late of the plight of 400 workers who were promised gainful employment but worked for as little as 50p a day on farms, rubbish recycling centres and poultry factories. This happened not in the 19th Century but from 2012-2017, uncovering the largest-ever modern slavery ring in the UK. The gangmasters earned millions while their victims lived in squalor… until, thankfully, their bosses were convicted following a three-year investigation.

Recent revelations that the booming UK fast fashion industry has often been built on low wages paid to women in factories on these shores as well as abroad has further rattled our consciences. MPs have found the Modern Slavery Act not robust enough to stop wage exploitation at some UK clothing factories, citing a lack of inspection or enforcement.

And on the issue of human trafficking, text messages found on a phone belonging to one of the 39 Vietnamese people who suffocated in the back of a lorry, in Essex left a further indelible impression on a UK public profoundly shocked that such a tragedy could have happened on their own doorstep. Again, here was a shocking insight into the acute distress lived by innocent victims of a hitherto hidden tragedy.

As the global death toll from Covid-19 passes the three million mark, there are thought to be well over 40 million victims worldwide of modern slavery, a quarter of them children.

In fact, Garrett Brown, a California-based occupational hygienist who has coordinated the Maquiladora Health and Safety Support Network since 1993, organising projects in Mexico, Central America, Indonesia, China and Bangladesh, believes the problem is even wider than this.

He suggests: “The challenge before us is not only the 40 million considered to be in the thrall of ‘modern slavery,’ but also the tens of million more who work exceedingly long hours, for very low wages and are subject to pervasive gender-based harassment and violence in global supply chains for apparel, electronics and other consumer goods.

“All of us – with occupational health and safety professionals in the lead – need to identify the root causes of this modern slavery and slavery-like exploitation and work together to establish the transparency and accountability needed to create a world of safe, healthy and ‘decent’ work.”

In September 2019, IOSH launched a white paper at its international conference in Birmingham, called Tackling modern slavery together: the roles of governments, employers, professionals and the public. The report identified a range of examples of modern slavery, including:

In her foreword to the white paper, modern slavery campaigner Baroness Young of Hornsey highlighted the real extent of the victims’ distress: “Their lives are controlled by the exploiters, they don’t have free choices about where they work or when, and are often subject to restrictive and/or coercive living conditions.”

A number of measures IOSH had called for in its white paper to be introduced by the UK government have subsequently come into being. These included:

But IOSH believes there’s still a lot more to be done in the UK, like:

Bev Messinger, IOSH Chief Executive, says: “We have to go further if we’re to stop modern slavery and all the global misery that goes with it.

“We have to learn how to recognise the distress felt by the more than 40 million people affected across the world and we have to find ways to stop it,” she adds.

“But we can only do this if we work together. There has to be a culture change, with organisations taking prompt preventive action and being held to account if they don’t.

“At IOSH we believe that public, professional and worker awareness can help ensure that warning signs of exploitation don’t slip beneath the radar and go unnoticed, with organisations mistakenly thinking they don’t have a modern slavery problem when, in reality, they need to act.”