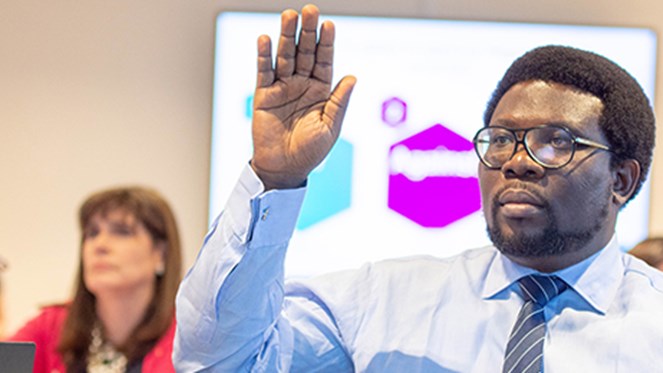 More members than ever will be able to attend the Institution of Occupational Safety and Health (IOSH) annual general meeting (AGM), which is being held virtually for the first time.

This follows Council approval of amendments to existing regulations to bring the AGM into the virtual sphere.

Now IOSH’s members can join the proceedings online – on Tuesday 27 October at 16.00 (GMT).

Lou Hall, Head of Governance, said: “Holding a virtual AGM is a first for IOSH. An AGM is a crucial part of any organisation’s governance arrangements and these amendments allow us to continue to fulfil our obligations to members in these unprecedented times.

“The amendments also future-proof the regulation to allow us flexibility on how we hold these meetings going forward.”

This was just one of the items discussed as part of a busy agenda at the Council meeting, held over two days on 23 and 24 September.

Council members also considered a review of elections, tabled in response to members’ feedback during this year’s election period. They agreed a number of resolutions to improve the process and commissioned the Head of Governance to produce a report on the ‘hot topics’ of campaigning and electioneering.

Council also considered the need to balance an open and fair candidacy process with a simple and engaging election.

“The number of candidates has increased year on year, which is really positive, but members have told us that this is making it increasingly difficult for them to review all the candidate statements,” said Laura Miles, Governance Team Leader.

“As a result, we’re looking at a number of changes identified by Council, which will continue to encourage nominations but make the voting process less onerous for members.

Also on the agenda was an update on the next five-year strategy and the part Council will play feeding into that, as well as items relating to the Member Grades Review. Council approved regulations made by the Board of Trustees to accommodate the conclusions of the review for inclusion in IOSH’s governance documents and to allow the Board’s Special Resolution to be included in the AGM agenda

Attendees also heard from Bill Gunnyeon, Chair of the Board of Trustees, who presented the Council assurance report. This was his ninth and final Council meeting, where he was thanked for the positive progress made with the Board and Council relationship during his tenure.