IOSH Mentoring was the topic of focus for the Caribbean Branch’s first virtual meeting of the year and was held in conjunction with the East Midlands Branch. It was the first collaboration between these two branches and was aimed at reaching members and non-members in both regions to highlight IOSH mentoring and how its assortment of benefits has helped members with their professional development. IOSH mentoring is a secure platform-delivered service designed to support OSH practitioners seeking to progress in their careers. It connects members desirous of knowledge in a particular area, with those offering skills and knowledge in that facet of health and safety. It is an excellent avenue to connect, learn from and build relationships with other OSH practitioners.

The meeting was held at 8:00 am local time in the Caribbean, which coincided with mid-day/lunchtime for the participants in the UK. The meeting was opened by our Branch Co-Ordinator, Emmeline Heaphy, welcoming approximately 60 individuals logged into the meeting and introducing the panel comprising of two mentors and two mentees. Jason Maitland, Chair of the Caribbean Branch chimed in, commenting on the fact that the pandemic has brought about many challenges but that the increased use of virtual sessions is creating more opportunities to collaborate amongst IOSH Branches. 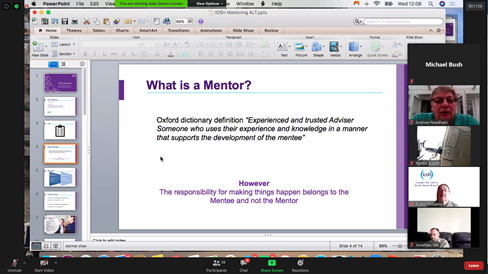 Screenshot taken at the beginning of the meeting

Mr. Alan Dunn a Chartered Fellow IOSH member and presenter for the session began by using a poll to get an indication of the number of attendees who were IOSH members and their level of membership. This information gave an idea of the current position of participants in their professional development and would later influence and shape the discussion. The Powerpoint presentation began with a definition of the term mentor, identifying the roles which are fulfilled by the mentor such as building confidence in the mentee, as well as the roles which do not form part of mentoring, such as teaching. The speaker underscored that mentoring is aimed at assisting the mentee with developing effectively by providing support and advice based on their knowledge and experience.

The presentation also highlighted qualities that make a good mentor such as empathy, accessibility and excellent communication skills. A summary of the mentoring process was outlined, along with the various mentoring subjects, including Continuous Professional Development (CPD) and Peer Review Interviews (PRI). The examples given relayed the message that members can utilize this tool at various levels in their careers to learn and progress. The presentation also provided information on the benefits of the programme to mentors, such as the reinforcement of the mentor’s own subject matter knowledge, as well as the several benefits to mentees such as skill development. Mr. Dunn also explained how the platform worked, including the selection of mentors.

Two mentees, one from each branch, shared their experiences with the programme. Natasha Joseph, a mentee of our Branch Chair, Jason Maitland, gave a vivid outline of the many ways support and guidance were afforded to her and how the encouragement of the mentor provided an impetus to keep moving forward, even in difficult times. Both mentors on the panel also provided an insight into their rewarding experiences. The experiences shared underscored the value of IOSH mentoring for both parties.

For more information on IOSH mentoring platform, click on the link below: